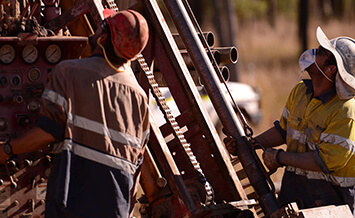 • Strong copper sulphide mineralisation observed extensively outside the IP chargeability anomaly; this outcome is highly encouraging, given 3D modelling of MIMDAS IP data did not initially indicate the presence of significant copper mineralisation in that area

• Primary Target: Interpreted Cu-Au porphyry system west of IP chargeability anomaly; veins of quartz-chalcopyrite-molybdenite and possible A or B Type veins in BTDD004

BTDD004 has confirmed that areas lying to the west of a large IP chargeability anomaly and towards a large interpreted Cu-Au porphyry system target are mineralised with extensive, strong copper sulphide mineralisation. It is also evident that the Company’s 2018 MIMDAS IP survey appears not to have identified this copper mineralisation or other areas of extensive mineralisation associated with a large 1.5km x 1km Cu-in-soil geochemical anomaly that is coincident with the interpreted porphyry intrusion target.

BTDD004 was collared 200m west of the IP chargeability anomaly and drilled in an east-north-easterly direction to a total depth of 658.9m. Planned as a ‘scissor hole’ to the first two holes (BTDD001 and BTDD003), BTDD004 was designed to test part of the large soil Cu anomaly west of the IP chargeability anomaly and mapped zones of silica-magnetite alteration and phyllic alteration now thought to occur above and to the east of a buried mineralised porphyry.

Strong copper sulphide mineralised vein sets were intersected over an interval of approximately 200m immediately west of the chargeability anomaly. Variable degrees of vein and disseminated copper mineralisation was intersected over most of the hole from near surface.

Importantly, veins of quartz-chalcopyrite-molybdenite which resemble Type-B veins in a porphyry system have been intersected. Porphyry Type-B veins are a classic indication of a nearby porphyry system. Assay results are yet to be received from the three holes.

A porphyry system at Bottletree would likely be located at deeper levels and to the west of the chargeability anomaly. This location is also coincident with the large and intense 1.5km x 1km copper and gold soil anomaly, a large oval potential intrusion centre interpreted from airborne magnetic survey imagery and a part-coincident oval feature on satellite imagery.

“We have confirmed that strong copper mineralisation extends a long way further west than indicated by the IP modelling and remains open to the west, at depth and along strike. We are also confident that several other similar copper-mineralised zones exist within and surrounding the porphyry target area.

“It must be noted, however, that these copper-mineralised zones are a secondary target and appear to be mere outer zones of mineralisation, or ‘leakage’ related to potentially, a much larger porphyry copper-gold system.

“The next program at Bottletree, aimed for the end of Q1, 2022, will be extensive and will target the interpreted porphyry system and the ‘satellite’ copper zones, including further drilling at the copper zone associated with the chargeability anomaly. To assist with designing the drilling program, a recently completed multi-element soil geochemical survey over the entire prospect area will provide modern geochemical vectoring tools. We will also be conducting a down-hole EM survey on BTDD003 and detailed analysis of airborne magnetic survey data and other geophysical data.

“Moving forward, the next few months will be a busy period. We will be receiving an enormous volume of assay data relating to the Bottletree drilling and soil geochemical survey, numerous rock chip assays relating to Bottletree and significantly, new areas of gold mineralisation along a 5km corridor between Bottletree and Steam Engine.

“With our expectations from the 2021 programs, we feel confidently poised to realise substantial value transformations during 2022 and beyond for the benefit of shareholders.”